“The secret to living is giving.” – Tony Robbins

We often think of “financial influence” in a negative way, such as corrupt government officials, massive corporations using lobbyists to mold the law to their own advantage, or wealthy individuals buying their way out of trouble. But have you ever thought of financial influence as the potential you have to change the world? Little ol’ you – along with millions like you – have already altered the world we live in.

It may seem hard to believe, considering the seemingly never-ending charity-driven campaigns and stories we get from the media about poverty and war, but the truth is that despite the discouraging volley of bad news, the generosity of strangers is making a difference. 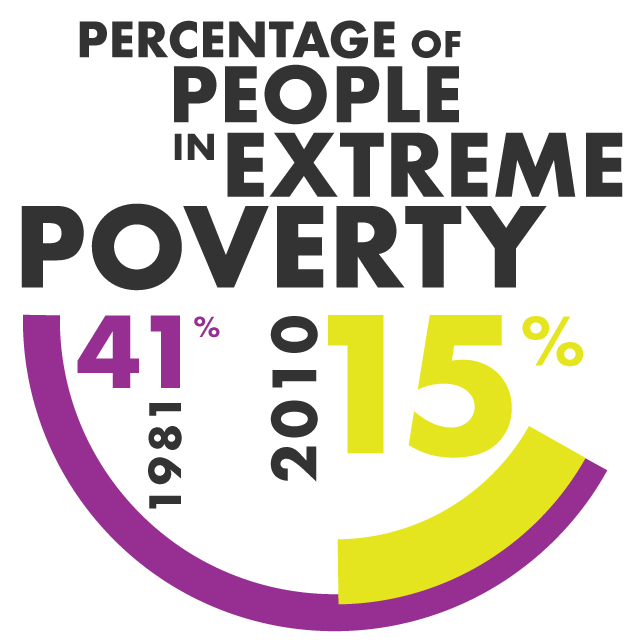 Giving is literally changing the future of the world by changing lives – increasing education, improving standards of living and providing access to preventative medicines. It is clear that our work is not yet done, but fortunately, it is now easier than ever to give.
Frictionless giving

You can deposit a check with your phone, make a purchase on Amazon with just one click — and now technology makes it easier to give, too. Remember back to the last natural disaster when you could send a text in order to donate to the Red Cross? This is what is referred to as frictionless giving.

When it’s easy to give, more people give. Online giving increased by 13.5% in 2013, while overall charitable giving grew by 4.9%, according to The Charitable Giving Report derived from The Blackbaud Index.

And apps like SwipeOut, expected to launch in summer 2015, will make giving even easier. This consistent funding model relies upon individuals providing their banking information to the trusted charity and allowing them to collect the donations by “rounding up” your credit card transactions and then giving the “change” to the SwipeOut Foundation. For example, if you make a purchase at Starbucks for $3.75, the app will round up the transition to $4.00, and the $0.25 will be donate to feed hungry Americans or rescuing a victim of human trafficking. You can limit the amount that is “rounded up” each month and 100% of your donations are tax-deductible.
The butterfly effect

We can all get caught up in the expenses of everyday life and financial planning, but preparing for our future and providing for our family’s needs doesn’t have to prevent us from giving to help those who most need it.

Although it may echo of the butterfly effect, it’s true that small, seemingly insignificant choices can make a huge impact. For example, Americans spent an estimated $3.25 billion this year on potato chips and $70 billion in lottery tickets. And yet it would take only $6 billion to provide basic education worldwide. Making small changes may be imperceptible to your lifestyle, but can make a major difference to someone else.

8 Ways to Change the World

Remember that no donation is too small. When it comes to giving foreign aid, the costs associated with meeting basic human needs are often far less in the developing world than what you might imagine. Just $3 buys an insecticide-treated bed net, to protect against mosquito-borne malaria. A mere $18 buys a pair of chickens for a family in a developing country through Oxfam America.

Some corporations will match their employees’ contributions to charities (especially their own foundations) up to 100%. Try searching your company’s internal website or speaking with your Human Resources representative.

3. Become The Company With A Cause

If you are a business owner, take advantage of tax-deductible giving and become the company that socially minded people want to join. “A company’s involvement with causes ranked 3rd most important factor to an millennial when applying for a job,” according to the 2014 Millennial Impact Report.

4. Give After You Are Gone

If you want options beyond donating cash and property, using your life insurance policy can provide tax deductions, meaning a higher level of leverage they can provide the charity. There are a few ways of doing this:

Charitable giving riders are now available through modern life insurance policies, although there are sometimes limitations placed on the maximum allowable gift amount. These riders usually do not require any additional costs, and they eliminate the need to create separate gift trusts.

You can also gift a life insurance policy, meaning the charity will receive the entire face amount of the policy upon the death of the insured. This method also reduces the donor’s taxable estate, potentially saving thousands of dollars in estate taxes for upper-income taxpayers.

Finally, the simplest way to give through life insurance is to name the charity of your choice as the beneficiary of your life insurance policy. Although this does not provide the income tax advantages of gifting a policy, it does still reduce the donor’s estate by the amount of the death benefit.

5. Give On Behalf of Family and Friends

How many ties does dad need for Father’s Day? Consider giving to an individual’s favorite charity in their name as an alternative gift.

6. Ask Others to Give In Your Name

Tell your co-workers that instead of gift cards you never seem to find time to use, you’d love them to give to those in need in your name. Or make the holidays less stressful by making an agreement in your family that the adults will give to charity in lieu of gifts. You could even pool your money and dig a well in India, providing fresh water to a village instead of fighting the malls for the perfect gift for your sister.

Volunteering is not just good for the world, it’s good for your mental and emotional well being. A recent study found that people who volunteer are happier with their work-life balance than those who do not volunteer. Find a cause that fires you up and start changing the world.

Despite the amazing advances made in eliminating world hunger, human trafficking is at an all time high. There are an estimated 27 million slaves today – more than ever before in history. Unfortunately, this means there is a good chance that slaves are working to make your clothes, electronics and chocolate, and you have no idea. Educate yourself on the brands and products you may want to avoid or become an abolitionist.

You can also look into companies that have “benefit corporation” status, which means they fulfill certain criteria for purpose, accountability and transparency. That is, they are legally bound to create a material positive impact on society and the environment. (See our full article on B-corporations, A Better Business.)

If you are unsure where to give or want to determine the effectiveness of any given organization, websites such as Give Well and Charity Navigator provide a third-party account of each charity and allow you to search for whatever cause you’re interesting in giving towards.

For more info on Positive Influence Through Finance visit: http://humanelevation.tonyrobbins.com/blog/money/positive-influence-through-finance